You are here: Home / Personal Finance / Investing in a Trump World

With Donald Trump making headlines on an hourly basis and our social media accounts going crazy with comments on his presidency of it being an effective coup and a one-way route to the apocalypse, we are left asking ourselves: Should we perhaps change our investment strategy as a result?

In short the answer is yes, but perhaps not how you think.

In earlier blogs, I have outlined how I consider it highly unlikely for the vast majority of investors that they can beat the markets themselves through active stock selection, market timing, or via picking the one out of ten actively investment funds that may do so over a ten-year period. And that for your equity exposure you should pick as broad and cheap an index tracking exposure as you can get your hands on, namely a world equity index tracker. “Just” because Trump is now president of the United States, that is no less true. You most likely couldn’t beat the markets before November and still can’t.

What you perhaps can expect is to make 4-5% above inflation. This is based on over 200 years of history of equity returns in many states of the world. And you can expect that return to range from lottery type winnings to desperate failures – can also reasonably expect to be compensated in higher risk periods with commensurate higher expected returns, but there are no guarantees obviously.

So, if even in a Trump world we haven’t found a crystal ball, what can we do?

Below is a graph of the expected future risk of the US stock market. Without being too technical it measures the expected standard deviation six months into the future. Since the index value is based on the implied volatility of equity options it is a market price. If you think you know the future volatility of the market better than this chart you can get rich trading it (many try!). There are many issues with this kind of chart, including that the value itself is very volatile (so the risk changes a lot), that the volatility doesn’t capture “fat tails” (the fact that unlikely events happen far more than predicted by the normal distribution assumption of the standard deviation), and that it is only six months into the future. That all said, the chart gives a good idea of future expected risk (you can find it on cboe.com). 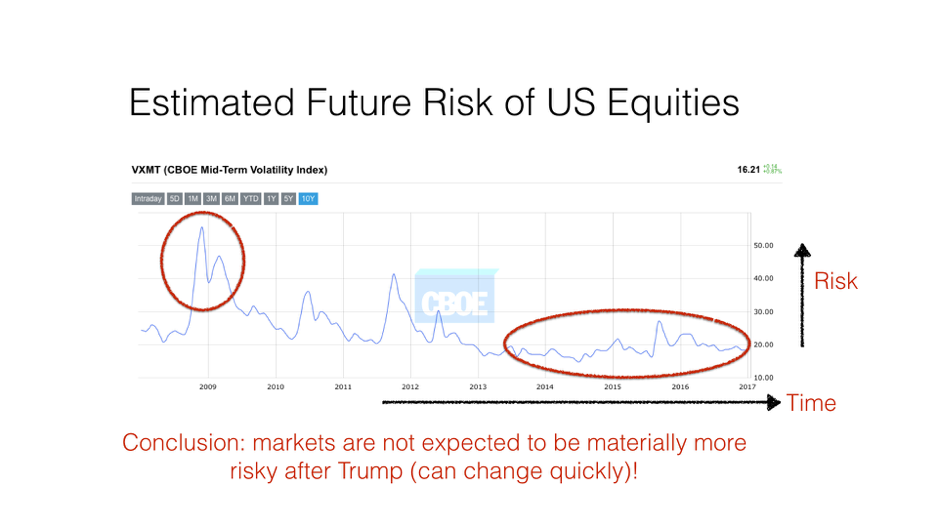 But what we see from the chart is that as momentous as the election of Trump undoubtedly was politically, in terms of market risk it hardly made a dent (see the very volatile 2008/09 period circled in red compared to the more recent period). Because the election of Trump was a genuine surprise (the Betfair probability of Trump getting elected was about 15% the day of the election) we can get a good sense of how much things shifted as a direct result of Trump’s election (if Trump had been expected to win the impact of his presidency would already have been built into the market price), and the answer is the equity market risk hardly moved.  Confused? Don’t be – but know that the expected risk of the stock market in the future did not change as a result of Trump, and that alone therefore should probably not cause you to change the risk profile of your investment portfolio.

So while the market risk has not changed, your personal risk may well have.

Although the overall market did not move hugely after the Trump election there are clearly some sectors and geographies that will be hugely impacted by his election. If you work at a Mexican company that exports most its products to the US then a Clinton victory would clearly have been better news, and you need to understand how Trumps election impact your overall life.

Similarly, imagine the scenario where you work in mid-level management at a BMW factory in the US. Confident in the company you have invested most your savings in BMW stock, your pension is guaranteed by BMW, and most people in the town you live in are also employed by BMW.

Now imagine Trump goes on one of his 3am Twitter rants saying “BMW are a bunch of foreign losers. Time to kick them out”. Some hours later after Trump has slept a bit and had his morning coffee he tweets: “I meant it. We are shutting them down”. Now hell breaks loose. BMW is down 50% and people start talking about the need to shut US operations and the risk of the BMW corporation defaulting on its loans.

Basically, your whole economic life has been turned upside down because of Trump getting out of the wrong side of bed. To say you are overexposed to BMW would be a massive understatement. Your job, pension, savings, and house all massively correlate to the BMW corporation. You were clearly guilty of putting all your eggs in the BMW basket and are now paying for it. Even less extreme versions of this example are well worth avoiding.

So how do you know if sectors you are exposed to might be helped or hurt by Trump (same argument goes for Brexit, etc.)? Again, because Trumps victory was a surprise we can see the market impact right after the election. If Trump’s BMW Twitter rant had been before the election you would expect BMW stock to be down a lot right after the election – that’s how you know. Similar it was not a surprise to see the Mexican Peso to decline after Trumps surprise victory. So my advice? Sniff around. Understand your economic exposures and see how those sectors fared after the election. Then see how much Trumps various statements and Tweets impact how things move.

If your investment portfolio consisted of a world equity tracker combined with super low risk government bonds, then you would broadly have diversified away a lot of the sector/company specific Trump risk. But like our BMW example above, your individual non-portfolio exposures may still lead you to change the risk you feel you can afford in your investment portfolio. As an example, illustrated below, you may previously have had the fairly bullish 75%/25% equity/bond split, but after assessing your new “Trump adjusted” risk, feel like a 50%/50% risk is more appropriate. Not because the markets have gone down in value or up in risk. But rather because the sectors or geographies you are otherwise exposure to changed your overall risk profile. 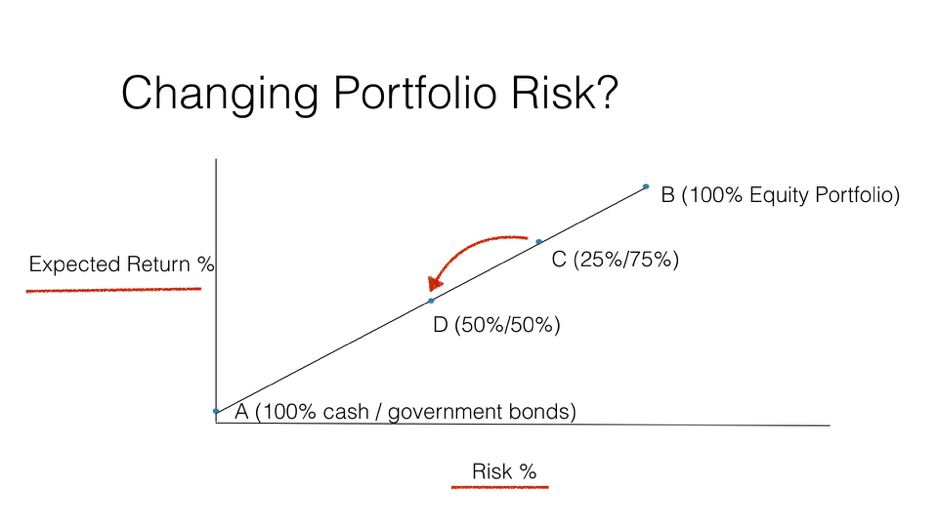 Deciding how a Trump presidency might impact your overall economic life is far from a science. We don’t really know and can’t expect to be precise about it. But you shouldn’t ignore the issue, particularly with something as potentially impactful as a Trump presidency.

If you are uncertain perhaps consider a financial advisor to help you think through your exposures. When hiring someone, make sure you don’t start paying them to actively outperform the market. Just like you probably can’t do that yourself, they are likewise extremely unlikely to be able to outperform. But they can help you with understanding your overall economic life, how your risk profile may have changed, or even how you can protect yourself from being the mid-level BMW manager in the example above.

In summary, I know it may feel odd that something can dominate the news like the Trump president and yet we are still not able to have a different perspective to that of the overall market. But do think about how it impacts your job, sector, house, pension, insurance policies, and other things that contribute to your overall economic welfare, and perhaps re-consider the risk of your portfolio as a result.

For a recap of the things discussed in this blog I’ve put a video on my YouTube channel which you can watch here – https://www.youtube.com/watch?v=w6wqnC-SqA8