You are here: Home / Frugal Living / Saving money on your phone bill, the easy way – buy the phone outright

It used to be that people bought their phone under contract from their phone company. By signing an agreement with their telco which covered a couple of years, people secured themselves the latest iPhone and enough minutes and data to keep them going. When the contract was up, they upgraded to a new phone and the whole thing began again.

At the time, this sort of deal made sense. The phone companies, keen to grow their business, heavily subsidised the cost of the phone. Since a new device often cost hundreds of dollars, this prevented new customers from being deterred by a high up front cost. The 24 month term allowed the price of the phone + plan to be an affordable monthly payment.

But the maths has changed. These days, buying a phone and a SIM together is often the worst thing you can do. Here’s why.

Get your phone outright and add a SIM Only plan

The critical thing to remember here is that phone contracts have been around for 25 years now. That’s a generation. Things were very, very different when these sort of agreements were cooked up by Telstra, Optus and, later, Vodafone. You were buying mostly minutes and SMS back in 1990 and you were getting a Nokia with a black and white screen.

In the ensuing two and a half decades, phones, phone companies and plans have all come a long way.

Here’s an example. Save 30% on your new iPhone

That’s the theory, those are the factors driving the market. But how much can you save ? In this simple example, from WhatPhone.com.au, buying your phone outright from Kogan and adding a SIM from the same place can save you 30% of the cost of a contract. Remember, Kogan use the same network that Vodafone sell their customers. They don’t use part of the same network or most of it. Kogan use the entire, whole Vodafone network. 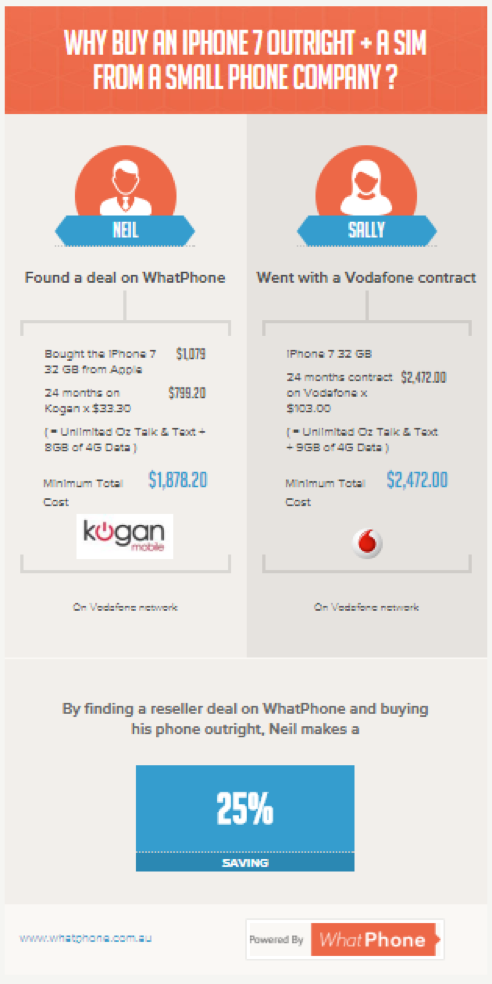 Why buy an iPhone 7 outright + a SIM from a small phone company?

Piecing together a phone plan in this way ( by putting together a SIM you have found yourself and adding your own phone ) is the shallow end of the pool. Approaching your agreement with your phone company in this way will ultimately save you money beyond the 25% we’ve shown. Here’s why.

Summing it all up

If you are financially minded then you consider your options, weigh the pros and cons and pick a rational outcome. With that frame, it’s not hard to see why contracts between individuals and their phone companies are rapidly becoming a thing of the past. Put simply, over the life of your 2 year agreement, you could very easily save yourself $1000 by piecing the deal together yourself.

Contracts represent the bad side of the old world. Instead of working to win your custom every day, phone companies want to throw a net over you and keep you in a cage for 2 years. That’s not how things work any more.

Follow the tips on this page to save yourself $500 or more on an iPhone purchase. And research the additional points we include here if you want to save even more.